We all know how easy it is to damn someone with faint praise.  When you describe a coworker as “not completely useless,” or a potential blind date as “decent enough looking, I guess,” other people understand immediately what you are really saying.  Faint praise is generally used intentionally, to send a message.  And that message is:  steer clear of that one.
Why don’t we just come out and say what we really mean?  The short answer is that  there is an awful lot of social pressure to avoid directly criticizing other people.  Studies show that people who “bad mouth” others are viewed very negatively.  (Gossipers very much included – lots of people like to hear gossip, but they rarely like the person delivering it.)
As the saying goes, “If you don’t have something nice to say, don’t say it at all.”  Faint praise is a great way to get around that particular problem – you get to technically say something nice, knowing that you are really saying something very different.
But what if you say something that isn’t just technically nice, but is actually nice – something genuinely positive?  New research by psychologists Nicolas Kervyn, Hilary Bergsieker, and Susan Fiske suggests that you can still inadvertently send a negative message, even when you say only unambiguously positive things – a kind of “accidental” innuendo.  The reason has everything to do with context.
When you are describing someone, people (largely unconsciously) expect you to mention aspects of personality or character that are relevant to the situation you are in.  In other words, if you are describing Bob to a potential employer, she will expect you to talk about Bob’s competence – is he hard-working, reliable, innovative?  If, on the other hand, you want to bring Bob along to a party and you are describing him to the hostess, she will expect you to talk about Bob’s warmth – is he engaging, funny, easy to get along with?
When you violate those expectations – when you focus on Bob’s warmth in the context of work, or praise his competence in a more social setting, new studies show that people draw very negative conclusions (even though, technically, you had only good things to say).  They assume that since you aren’t addressing what you should be addressing, you must be doing it intentionally.  What you aren’t saying leaves the biggest impact.
For instance, in one study, “Pat” was described as either “nice, outgoing, and sociable,” or “smart, hard-working, and competent”  Participants were asked to evaluate Pat as either a potential employee or as a fourth member of their travel party across Europe. When Nice Pat was judged in the context of travel-buddy, the overall impression was highly positive.  But when Nice Pat was judged in the context of work, he/she was rated very negatively.  Participants assumed that since no one mentioned Pat’s most relevant attribute – competence – that Pat must be a very nice doofus.
The key to avoiding unintentional innuendo is to really think about context when you are weighing in on someone’s good and bad qualities.  You might think that your friend’s best quality is his terrific sense of humor, but if that’s what you focus on when speaking to a potential employer, you may cost your friend a job.  Take the perspective of the person you are speaking to – what do they want to know about Bob?   Focus on the most relevant attributes, and you are more likely to leave the impression you actually intended.
Check out my new HBR eSingle Nine Things Successful People Do Differently (an expanded version of HBR’s all-time most viewed blog post)  (only $3.19 on Amazon!) 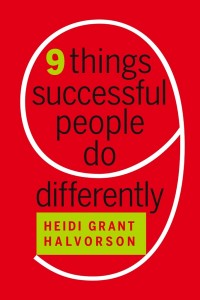