At the very end of 1998, NASA launched a much-anticipated robotic space probe called the Mars Climate Orbiter.  Its mission was to collect data about the atmosphere, and act as a communications relay for the Mars Polar Lander.  Nearly ten months later, it arrived at the red planet, only to disappear just as it was supposed to establish an orbit.
It had come, unintentionally, 100 kilometers closer to the planet’s surface than originally planned, which was 25 kilometers beneath the level at which it could properly function.  Instead of orbiting Mars, it plowed right through the atmosphere (possibly disintegrating) and was lost to us forever, taking $125 million in American taxpayer dollars with it.
The problem, it was later discovered, was one of unit conversion.  The team of engineers at NASA worked in metric units (the standard they had adopted in 1990.)  The engineers at Lockheed Martin who helped build the Orbiter and its navigation systems, on the other hand, worked in English units of measurement (pounds, inches, etc.)
When asked how an error of this magnitude could have occurred (particularly one that seemed so simple to have gotten right in the first place), Tom Gavin, chief administrator of NASA’s Jet Propulsion Laboratory, said “Something went wrong in our system processes, in checks and balances, that we should have caught this and fixed it.”
When an organization (or an individual) makes a big, expensive and embarrassing mistake, it attracts loads of attention.  But do you know what almost never attracts the attention it deserves?  When things go the way they are supposed to.  And because of this, roughly half of us – people we call prevention-focused – rarely get the credit we are due.
As I’ve written about in previous posts, prevention-focused people see their goals in terms of what they might lose if they don’t succeed.  They want to stay safe – to hold on to what they’ve already got.  As a result, they are diligent, accurate, analytical, and go out of their way to avoid mistakes that might derail their success.  They excel when it comes to keeping things running smoothly.
Promotion-focused people, on the other hand, see their goals in terms of what they might gain if they succeed – how they might advance or obtain rewards.  Their strengths, relative to the prevention-focused, are creativity, innovation, speed, and seizing opportunities – exactly the kinds of qualities that the business community (and our culture as a whole) tends to admire and praise.
But what the story of the Mars Climate Orbiter so compellingly illustrates is that there isn’t (or at least wasn’t) nearly enough prevention-thinking going on in the NASA labs.  It’s not really surprising – these people, after all, are rocket scientists.  They devote their lives to exploring space– if there is something more promotion-focused than that, I don’t know what it is.  These folks pretty much own the phrase “going where no one has gone before.”
The heroes of the business world always seem to be the risk-taking promotion-focused innovators.  But you see, it’s really not that there are no prevention-focused heroes – it’s that they are so often unsung.  You rarely get the credit you deserve for averting disaster when it never happens.   No one says “Way to convert those units from inches to centimeters, Bob.  You just saved us $125 million dollars and a boatload of humiliation.  You rock!”  Instead, the prevention-focused toil away, quietly and carefully, making sure that things work the way they are supposed to.  They see to it that the airplane you are flying in won’t fall apart at its seams mid-flight, that the medication you are taking wasn’t contaminated in the factory, and that your large skim mocha latte really is decaf so you won’t still be up at 4 a.m. watching The Weather Channel.
When what you are good at is keeping things running smoothly, and things do run smoothly, your contribution is – sadly – less likely to be noticed. So you probably won’t get the praise you have in fact earned.  (Unless you are the immediate successor to someone who let things go to hell in a handcart – then people will appreciate you, at least for a little while.)   And this is a big part of why Tory Higgins and I wrote FOCUS – to make people understand that there are two ways of looking at our goals, that result in two sets of distinct strengths – both of which are critical to the success of any team or organization.
Portions of this post were adapted from Focus: Use Different Ways of Perceiving The World For Successand Influence. 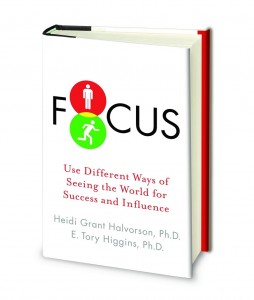